The first visit was a quest. Several contacts who might lead me there fell through, yet I was determined to find this high priestess who was dedicated to water so I decided to set out with a driver and a friend to find her small village Demulih, which the Balinese tell me means "not welcome"—well, here we come!

When we finally arrived, not only were we welcome, our timing was auspicious, though unplanned. The high priestess was about to begin her mid-day prayers, and graciously invited us to meditate while we waited. Afterward she would do the water purification ceremony for us. We sat where she indicated, slightly behind her, and meditated with eyes open so we could see her Hindu-Buddhist rituals holding a vajra, ringing a bell, flicking water and flowers into the air, chanting for 20-30-40 minutes. We were entranced. 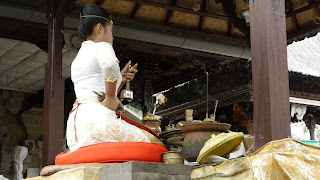 She turned toward us with a radiant smile, motioned us over and explained: we would be completely wet with water and afterward we would change into dry clothes. Of course, we didn't know, so brought none. When my turn came, I stepped up to the high platform she sat on. Her young niece filled many water bowls. She asked me to pray. I put my hands in front of my heart in the customary western way, and bowed my head. 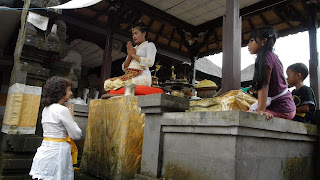 The water began to pour over me in cascades. I needed to tilt my head down avoid breathing water. Down it came in gushes. 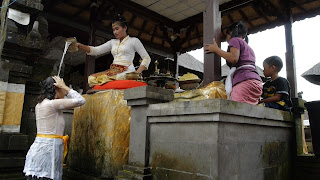 Next, she told me to wipe my head. I brushed the water through my wet hair many times, felt tension release, yield to water, and raised my hands high above my head, receptive, receiving. 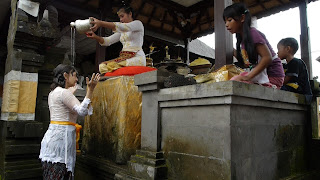 After several minutes she told me to pray. This time I placed my hands near my forehead Balinese style and felt an expansive wholeness words cannot describe. 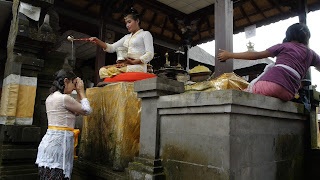 Drink, she said, and I cupped my hands right over left and drank the sacred water she offered many times. 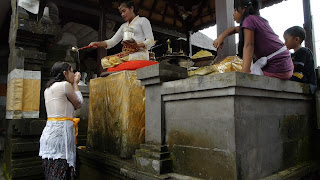 The next visit, two young European women who were also drawn to the water ceremony came along with my friend Yolanda from Mexico and I. This time, many Balinese families were there also. 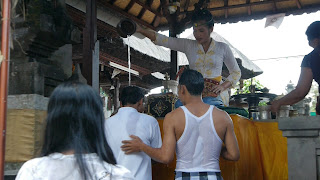 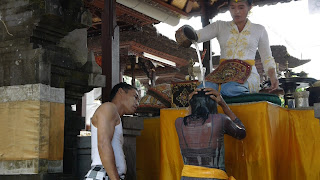 Many people responded strongly, with motion, cries, and laughter releasing as the water cascaded. Ida Resi sometimes gave instructions to help move the energy: stamp your feet, breathe deeply, pull the energy up into your heart. 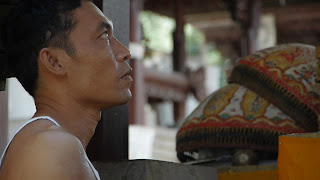 There we were—Mexican, Belgian, Hungarian, Romanian, American, British and Balinese all reveling in these moist moments, drinking in ineffable healing transmitted in Ida Resi Alit’s own star language, the mother tongue we all shared. 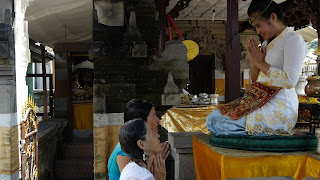 Of all my journeys in Bali, all the ceremonies that raised my spirit and awareness, these water purification ceremonies are the ones that led me here because they affirm the sacredness of water. 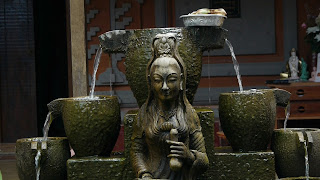 Through all our water woes and water wars, this is the reason we struggle and fight—because water IS sacred. Most of us have forgotten, but some still remember and offer water blessings to whoever appears at her door. 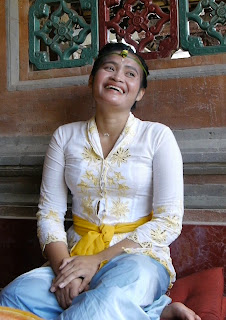 After these three ceremonies,
I am moved to make a vow:
To learn more about healing water
to balance all I’ve learned about water ills.
Mara
Asmara (my Indonesian name)

From "A Little Book on Ida Resi Alit:" Ida Panditha Mpu Budha Mahaseri Alit Parama Daksa, also known as Ida Resi Alit, was born I Komang Widiantri on March 14, 1986, in a small farming village in the central highlands of Bali. She lived as an ordinary girl for the first twenty years of her life. At the age of 20, due to external events, she fell into a deep depression. Ida Resi Alit’s uncle, a village Mangku, concerned for her well being, introduced her to meditation and yoga to soothe her. As she started practicing, the girl who had no previous spiritual training or deep desire, began to have out of body experiences and download information during her practice. She was instructed to perform a special ceremony, the meaning of which she did not understand. At the ceremony she fell into deep unconsciousness. She stopped breathing and her pulse was gone. Her family wailed, crying and reacting hysterically, scared that she had died. Ida Resi Alit has no memory of this time. At 2am she started to regain consciousness, to be able to blink but not to talk. Then she saw a laser, like a bolt of lightning in the sky, and found herself able to fully return to her body. She slept until the afternoon and when she had awakened spiritually. She was able to recite mantras she had never been taught. High priests were called in to confirm this. Not only were the mantras valid, she knew many more that the priests had not yet learned. Soon after she was ordained by the highest authority, the Hindu Dharma Council, and she became Bali’s youngest and only female High Priestess.

Let us know your thoughts about water.

Enter the world of this essential element as we explore questions such as: What is your water footprint? Why is water considered 'Blue Gold'? Why is water an important part of many religious rituals? We will use perspectives from the humanities, arts, social and natural sciences, with a focus on the global politics of water sustainability and its media representations. Internet readings, videos, podcasts, guest lecturers and discussions link students with national and international experts. This asynchronous class that can be done from anywhere with high-speed online access.

Mara
United States
The ocean was my first water friend. I spent my first nine months in my own amniotic sea, as we all did, then my next nine months, I was strolled on the boardwalk by the ocean. The last few years, my lifelong connection and concern for water resurfaced, and I work actively to encourage awareness of freshwater issues. The question I ask everyone is this: Do we respect water or take it for granted? I designed the Water Planet online course to explore water questions. This interdisciplinary course offers online videocasts, podcasts, international guest lecturers and discussions that link students and experts. It is an asynchronous class that can be done from anywhere with online access. Visit www.MaraAlper.com for more info.