Visit to a Balinese Healer, the Balian 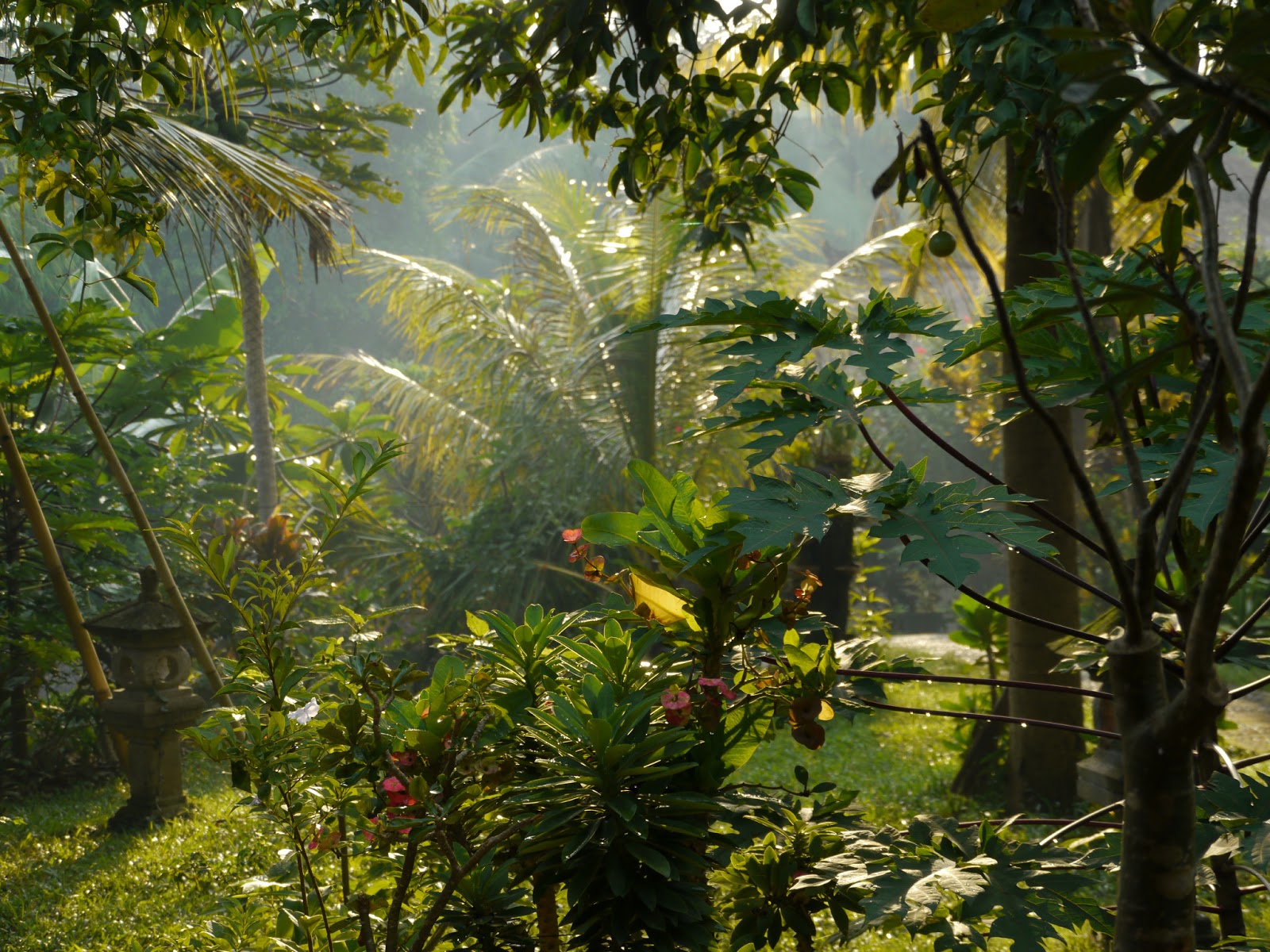 (No pix from this event-- didn't feel appropriate- didn't even bring my camera.
Pix provided to delight with other Bali views)

I ride on the back of Danu's motorbike sidesaddle since I am in the ceremonial sarong, long, tight, down to the ankles. The crescent moon is hazy in the humid air. Bright stars glisten between the clouds. The wind is warm, perfect temperature. We join the others waiting, sitting on the beautiful stone platform with pillars wrapped in bright fabric, golden carvings on the doors and windows, a faint recorded mantra repeating om namo shiva as the daughter of the priest, a young woman wearing all white, gives water blessings to a few people one at a time.
When the healer, his daughter and son-in-law come out of the temple area, they are casual, smiling, maybe joking. Everything is Bali rituals is formal with casualness surrounding it it. They take their seats on the raised platform of the building with the ornate gold carved doors and call family groups up one by one.
The healer makes different motions and sounds for each person seeking healing. Sometimes quick bursts of breath, sometimes, guttural sounds, always his hand slowly circling toward the person, fingers moving in varied patterns, his eyes closed, his hand sensing. His daughter assists with different hand motions, burning incense. His son is in prayer pose or making varied mudras with his hands. They each channel some part of the energy.
A pattern emerges. The men and boys who get healing sit quietly, cross-legged, hands on knees, then talk with him quietly, receive water purification blessings and something written on a piece of paper, perhaps a mantra, some kind of prescription.
The women who get healings move a great deal. The first holds her arms out, shakes them, and makes crying sounds, possessed, in trance, resisting the holy water by turning her head away. The second has her hand held by the healer as he pulls hard on certain fingers. She recoils away from it, crying out in pain. He keeps pulling. Her son moves behind her, supporting her back and pushing her towards the healer so she cannot back away. At the end of each healing, the women talk quietly and are calm, even smiling. 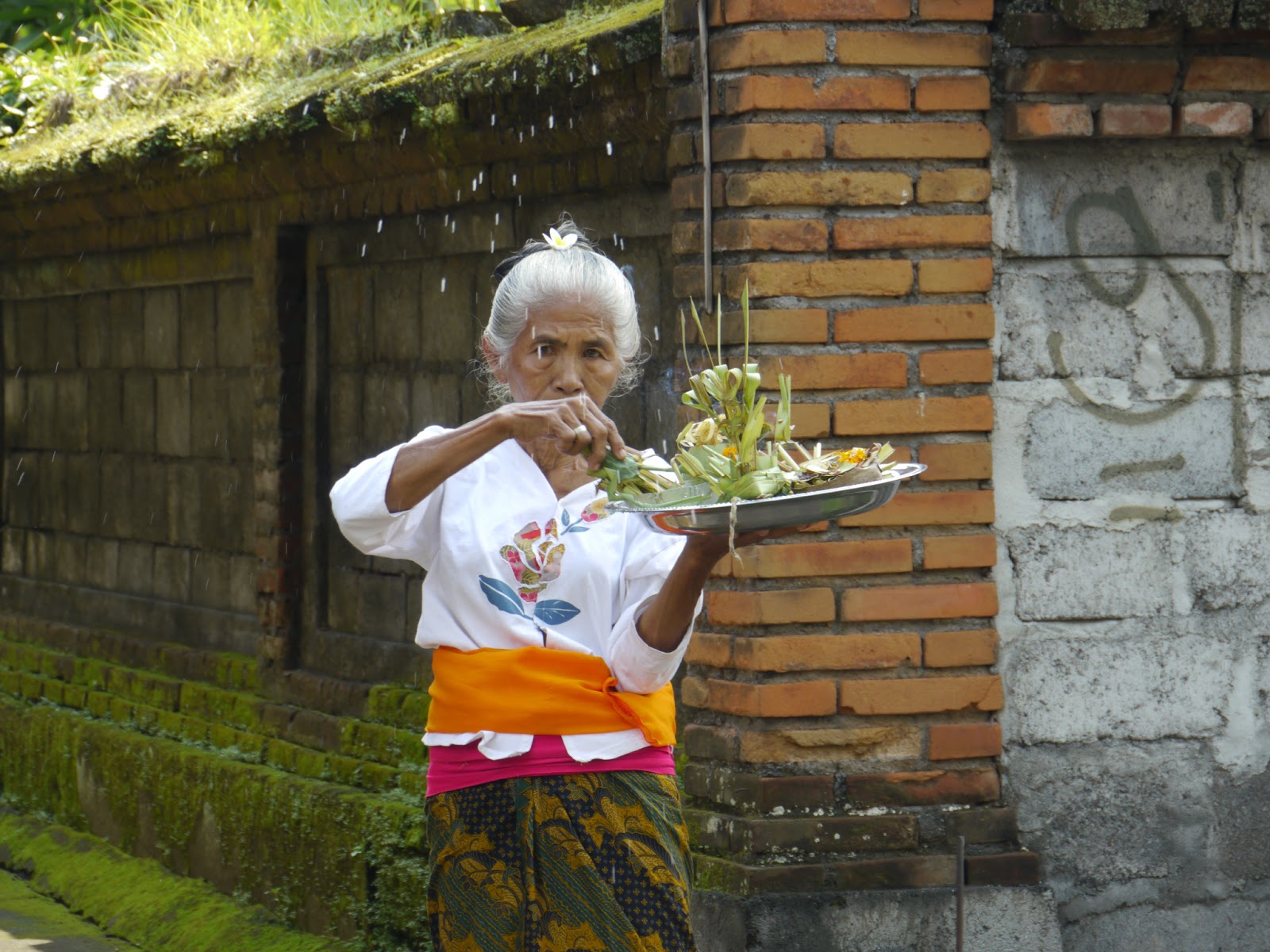 Next, it is our turn. I go up with Danu and Ketut’s family, their 16-year-old son, Danu’s mother and their oldest daughter, in her early 20s. Their son hurt his leg a couple of weeks ago, needed stitches, couldn’t play badminton or go to school for a few days. He has come to the healer a few times during the healing process, as well as a doctor and masseuse. The healer tells him to sit up straight in meditation position – the family laughs—seems a typical request for a teenager- stop slouching! The healer waves his hand around him and quickly smiles and is clearly saying positive, encouraging things to him. I can see it is about the strength the boy has, his power, about letting his power rise up in him. It all seems very encouraging, even without understanding a word of the Balinese spoken, just reading the expressions and body language.
Meanwhile, his older sister is sitting next to him and is slowly leaning over towards the floor. She begins to cry, at first a soft weeping, then a louder cry. The healer turns his attention toward her but he addresses all his remarks to the son. Her cries get louder. She sits up and extends one arm, hitting her brother with the broad side of her arm, not hard but heartfelt, crying out to him with anger or frustration.
I begin to make a story – she is jealous of the attention given him, the lavish praise. She cries to turn some of the attention to her. As a female, she will never get the respect that he gets and this is how it manifests. I feel great pain at seeing these women showing such emotion and anguish while the males are stoic, silent and praised. (When Danu explains what is really happening, it is easy to see that this story is my own projection. Read on . . .)
The healer puts his hand on her hand. His other hand stretches across to the back of his daughter who is fervently listening to some inner voice and telling him what she sees and senses. He repeats it back to the older daughter, the conduit between the two. Slowly the daughter grows calmer, lays her head on her brother’s knee. He is awkward, puts his hand on her back, then takes it away and leans back on both hands.
When she calms down, the healer talks to the family. The grandmother asks questions, the mother comments. The healer makes eye contact with the son and begins to compliment him again, makes eye contact with the father and talks, avoids eye contact with the daughter until it is time for her to receive her water blessing.
Once the blessing is done, she smiles, makes some lighthearted remark, laughs. The family makes some joke and laugh in good humor as we go down the steps from the platform.
I feel interested in the channeling the healer does with his family assisting, feel the energy of it. But I feel disturbed by the women’s anguish, so strong and disquieting. I read into it the cultural burden of women being seen as lesser than men. Less recognition, less respect, more need to weep and wail. It is painful to witness. Yet on a daily basis, the women are sweet and gentle, exceedingly warm. There is much this outsider doesn’t understand. 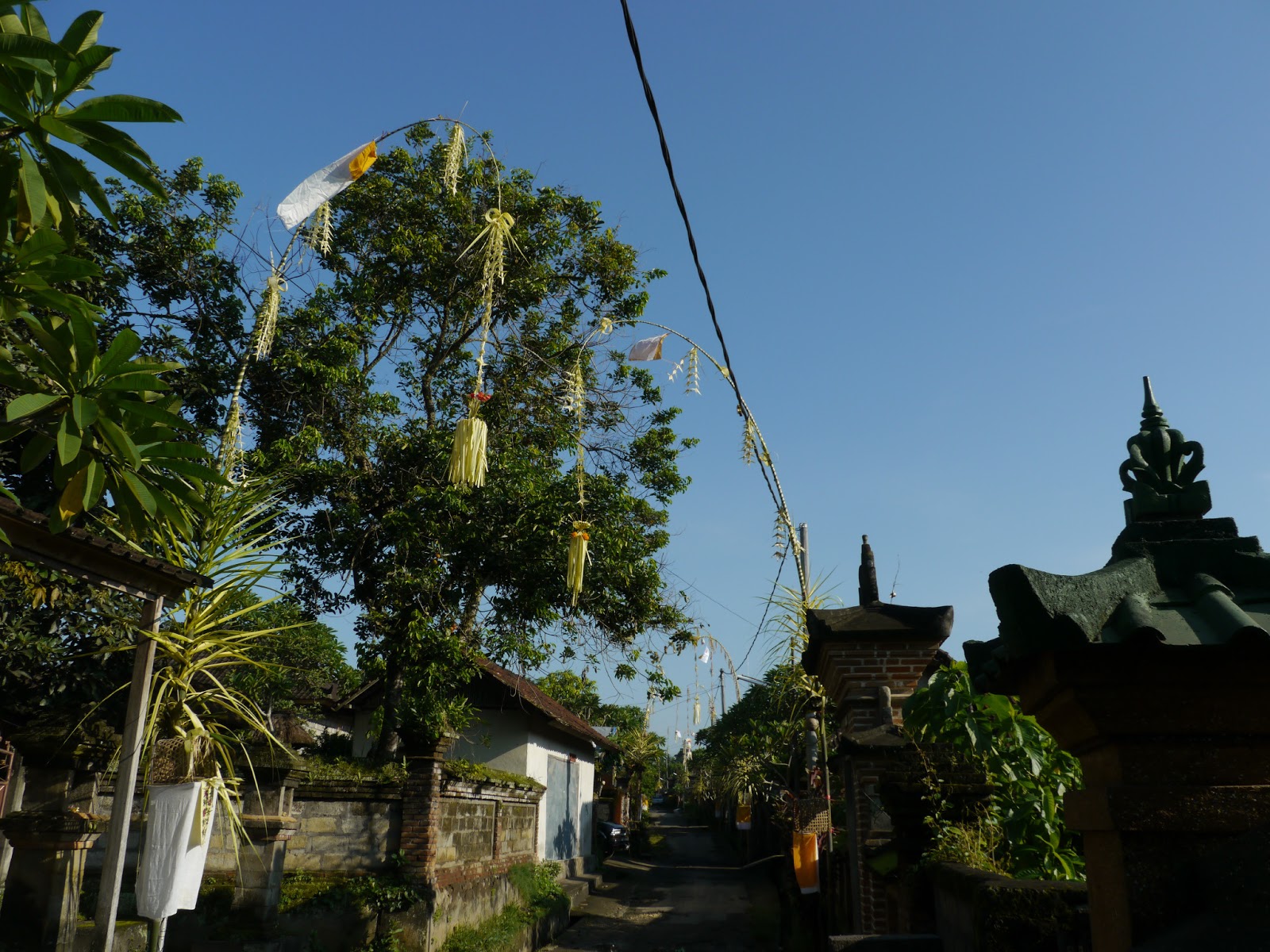 When Danu explains it to me the next day, I have interpreted the healer’s message for his son very well. But his older daughter’s story is one I couldn’t guess, except the first part of it. Her mother-in-law doesn’t want her to be a teacher, but to stay home with her five-year-old son instead. The daughter wants to continue teaching as she has for a few years. Apparently the mother-in-law has used magic on her, giving her bad headaches and lower life energy. She is seeing the healer to help overcome the bad magic. Danu has asked his grandmother ancestor to tell him how to help his daughter, but she does not answer him because he did not pray to her and respect her enough. But his son has made prayers to her spirit every day in their family temple before he goes to school. The family feels she has reincarnated in him, so she is willing to talk to him about solving it. When the daughter hit her brother, it was her exhorting him to pray to great-grandma so she can have peace.
There is no way I could have guessed this scenario. Yet, because I do believe in spirits and invisible energies, I find it all plausible. Yes, a mother-in-law can send bad energy and thoughts to a daughter-in-law, want her to do things her way. Yes, that can effect the young woman’s health. Yes, the brother can be spiritual and open to receiving guidance from wise ancestors. It is very complex, and perhaps far fetched to some, but it makes sense to some of us.
On Monday, I will come again with Danu and his son and daughter for meditation and to receive a healing. The healer’s son-in-law speaks English, lived in Australia for years, so I will speak through him. Not sure what I will ask for or explain - perhaps about wanting to open to more patience and trust, since those have been my inner themes for my meditation. Perhaps about wanting to open to the healer within me more. Certainly about releasing tension stored in my body. I’ll talk to Danu about it.
So I have had my first experience of a Balinese balian healer. It is intriguing to be sure. But the issues raised about women are difficult. Tomorrow, I plan to go to see a woman high priestess in Bangli, an interesting contrast indeed.
Posted by Mara at 9:49 PM

Let us know your thoughts about water.

Enter the world of this essential element as we explore questions such as: What is your water footprint? Why is water considered 'Blue Gold'? Why is water an important part of many religious rituals? We will use perspectives from the humanities, arts, social and natural sciences, with a focus on the global politics of water sustainability and its media representations. Internet readings, videos, podcasts, guest lecturers and discussions link students with national and international experts. This asynchronous class that can be done from anywhere with high-speed online access.

Mara
United States
The ocean was my first water friend. I spent my first nine months in my own amniotic sea, as we all did, then my next nine months, I was strolled on the boardwalk by the ocean. The last few years, my lifelong connection and concern for water resurfaced, and I work actively to encourage awareness of freshwater issues. The question I ask everyone is this: Do we respect water or take it for granted? I designed the Water Planet online course to explore water questions. This interdisciplinary course offers online videocasts, podcasts, international guest lecturers and discussions that link students and experts. It is an asynchronous class that can be done from anywhere with online access. Visit www.MaraAlper.com for more info.